Monopoly Profits in the Wheat Flour Market in Armenia 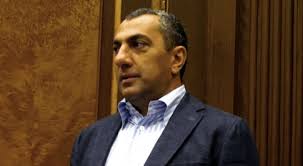 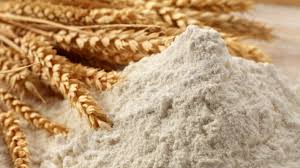 Executive Summary: Conservative estimates show that the companies involved in importing wheat and selling flour on the Armenian market charge approximately double what it costs them to import, transport, mill, and sell the wheat/wheat flour. In 2014 alone, the two companies in question pocketed nearly $110 million in pre-tax profits from wheat importing after subtracting all costs. The ability to extract these (monopoly) profits—which amount to nearly 10 percent of the budget of a person under extreme poverty—is likely to have contributed significantly to poverty in Armenia over the years.

Bread and bakery products constitute more than one-third of the value of food basket of Armenian families (National Statistical Service of Armenia, 2012). Since almost two-thirds of wheat consumption is imported, bread prices in Armenia depend heavily on the structure of Armenian wheat import market.

The Armenian wheat market is highly centralized (State Commission for the Protection of Economic Competition of Republic of Armenia (SCPEC, 2011)). There are two major firms in the wheat flour market, Alex Grig and Manana Grain, which together control almost 88 percent of the market. Those firms not only control the import of the wheat, but also its milling and thus the wheat flour market. They have significant role in determining the prices of both wheat and wheat flour in Armenia.

B. Domestic vs. International Prices for Wheat and Flour 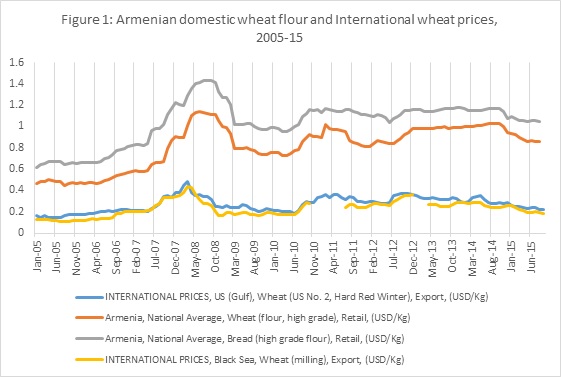 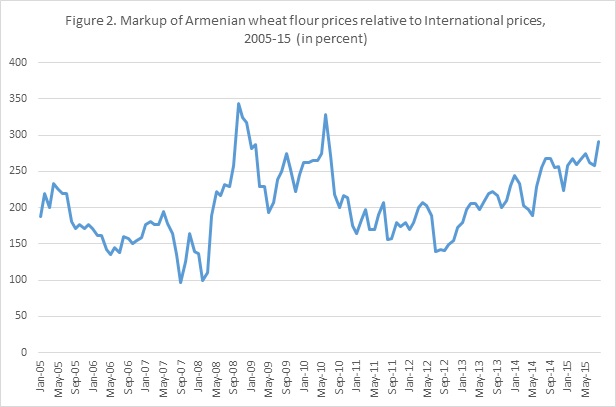 C. Wheat Flour and Bread Pricing in Armenia and other CIS countries

Figure 3 compares prices of wheat flour in Armenia, Russia, and Ukraine. Despite a sizable gap in consumer purchasing power between Armenia and Russia/Ukraine, retail prices in Armenia are higher than in latter countries (in case of Ukraine by almost 3 times). 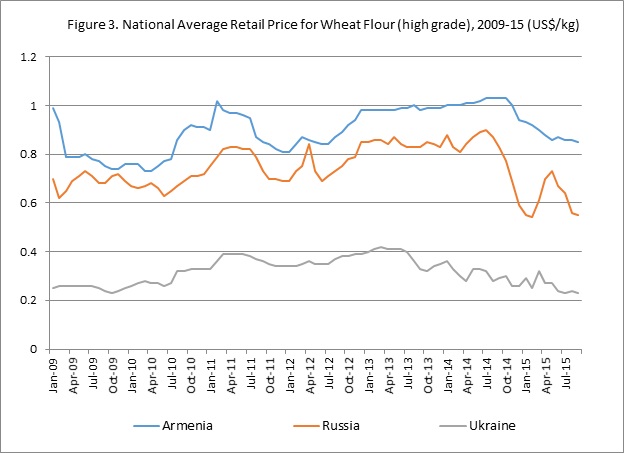 Figure 4 compares the prices of bread in Armenia, Azerbaijan, and Tajikistan, all importers of wheat and wheat flour. It is shown clearly that bread prices in Armenia are higher than in Azerbaijan and Tajikistan by a large margin (almost two times relative to Azerbaijan). The results are consistent with a recent World Bank report that shows that price of bread in Armenia is by 36 percent higher than average in CIS countries (see World Bank, 2013). 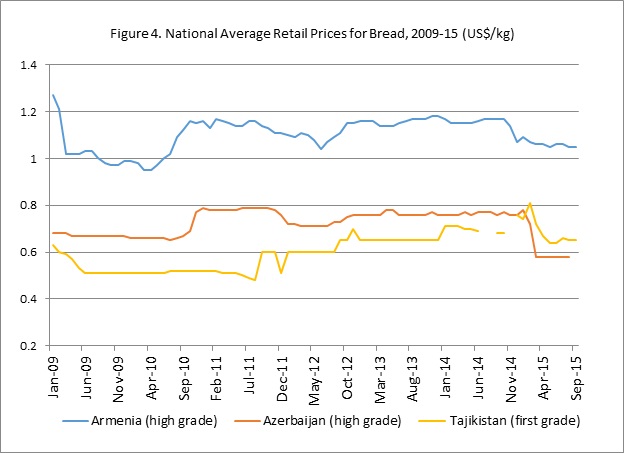 D. The Percentage Markups and Profit Margins in the Armenian Flour Market

This section aims to estimate the monopoly mark-ups/profits extracted by the two importing companies. The following assumptions are made in the calculations:

Table 1 below summarizes our findings on the average markup and profit margins made in the Armenian flour market.

Table 1. Calculations of Monopoly Markups for the Wheat and Wheat Flour Market

The above results show that the companies involved in importing wheat and selling flour on the Armenian market charge a hefty 93 percent markup on their costs, that is, selling at nearly double what it costs them to import, transport, mill, and retail the wheat/wheat flour.

Depending on the project cycle (i.e., the time between paying for the wheat abroad and getting paid for retailing wheat flour in Armenia), this markup could turn into profit margins of several hundred percent per year, guaranteeing the importers super profits by any standards. In 2014 alone, our estimates suggest that the two monopolists pocketed nearly $110 million (or nearly AMD 50 billion) in pre-tax profits from wheat importing after subtracting all costs.[4]

This constitutes additional cost for Armenia’s consumers—ranging from AMD 2,000 to AMD 2,500 per person per month, depending on the estimates of actual population—and has contributed significantly to poverty in Armenia, where the extreme poverty line is estimated at AMD 23,384 per adult equivalent per month.[5]

The actual markups are likely to be much higher than the ones calculated above for the following reasons:

Food and Agriculture Organization, Global Information and Early Warning System, 2013. “Prices on Wheat and Wheat Flour for Armenia, Black Sea and the US Gulf.” Available from GIEWS Data database.

State Commission for the Protection of Economic Competition of Republic of Armenia, 2011. “Annual Program of Activities.” Available from SCPEC website.

[1] Since Armenia imports wheat mostly from Russia and countries in the Black Sea region, the Black Sea export prices are more relevant for Armenia. However, the US Gulf and the Black Sea prices in general behave similarly.

[2] The South Caucasus railway charges $0.78 container/kilometer for 40-ft container with cargo in it. It is 516 km from Poti to Yerevan, thus the transportation of a 40-ft container costs $402.5.

[3] The average bulk density of wheat is 0.75 ton/m3. A 40-ft container (67.2 m3) can thus carry 50.4 ton wheat. However, since the maximum weight allowed for land transportation is 26.5 ton, this will be the actual amount of wheat carried in one container.

[6] A recent media report on quality of flour sold through the “Yerevan City” supermarket chain can be found here (the flour purchased by a customer contained insects and worms).

This entry was posted in Admin, All listed by Author, Economics. Bookmark the permalink.