Silence and Hypocrisy—Killers of Hope 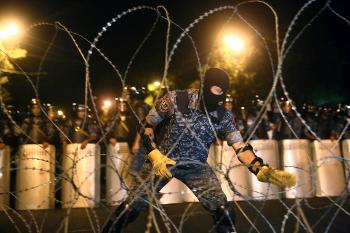 An urgent call for our Diaspora to demand democracy and human rights in Armenia.

While many foreign and outside entities had appealed for a non-extreme response to the extreme actions taken by an armed group at the Yerevan police station, the Diaspora largely remained silent.

By contrast, the rulers in Armenia have engaged in wholesale mass arrests and detention of anyone they suspect as the opposition, including peaceful protesters exercising their constitutional right to assemble, whether to appeal for moderation or express their grievances against government policies and practices.

The Armenian Diaspora at large has not adequately spoken out against these government actions. At this point, it is difficult to fathom the motivations for such silence.

Could it be the belief that we, in the Diaspora, have no business interfering in internal affairs of a foreign country—except when it comes to the Karabagh question and Armenia-Turkey relations? Or is it the notion that it’s the Armenian government’s job to serve the needs of its people—except when it comes to the sick, the needy, the poor, the military, elderly, public schools and children?

Only the ruling elite seem to have their needs addressed while living lavish lives supported by ill-begotten funds sheltered in the names of family members and off-shore shell companies.

Recently the Catholicos of All Armenians himself thought it appropriate to condemn the violent acts of these “Daredevils”, but he has not condemned the injustices perpetrated by the ruling party against the flock– such as systemic election fraud and gross human rights violations, including unleashing the over-aggressive police and infamously brutal thug brigades.

Many community leaders in the Diaspora have acknowledged, behind closed doors, that it’s no secret to them that Armenia is severely corrupt, but they could not speak truth to power because it might have compromised the good work they were doing to instill “hope for a better future” among the people—except when that hope was for a clean government that evens the economic playing field, allows for free and fair elections, and insists on an independent judiciary and Rule of Law. Perhaps they considered those minor issues compared with poverty and hunger. Yet we all have witnessed on many occasions that the people were not protesting against poverty and hunger but demanding democracy and human rights.

So while we were patting ourselves on the back for working to instill hope, our silence and hypocrisy were killing that hope, rendering much of our time, money and efforts in Armenia futile and ineffective–posh hotels, fancy restaurants and high tech “showcase” schools notwithstanding.

Most of us thought time was the cure for Armenia’s ills and that somehow, magically, the leaders would come to their senses and live up to the promise of the new Armenia.

Yet two decades is long enough to prove that corruption only breeds corruption, leading to a failed state and cynical society that has nothing left to lose. As John F. Kennedy wisely admonished, “Those who make peaceful revolution impossible will make violent revolution inevitable.”

If we are truly honest, it may already be too late to overcome the high stakes and perilous road ahead. Yet, if ever the Diaspora had an opportunity to show its true mettle, the hour has come.

All who recognize this crisis point, should urge our community representatives and organizations, charitable, religious and political, to publicly decry those responsible for the rampant abuses of human rights and dignity and support those that seek electoral reform and an accounting of unlawful police tactics. The former would include the public inspection of voter lists, and a meaningful investigation of violations committed during last December’s constitutional referendum and those who have to date blocked such an effort.

We should no longer consider the alternative an option—that is, trying to preserve a fabricated and false sense of law and order that cripples Armenia’s ability to meet challenges at home and at the border while inciting civil violence.

Taking a clear stand on the side of human rights and justice won’t instantly solve the deeply entrenched problems that plague the country. But it’s a first step in a new direction, that, if made courageously, wholeheartedly, unequivocally and boldly, will instill hope among the people as never before.

They’ve been waiting for us to answer their call but, as we’ve witnessed from recent events, they can’t wait forever.

This entry was posted in Admin, POLITICS, SOCIETY. Bookmark the permalink.

3 Responses to Silence and Hypocrisy—Killers of Hope