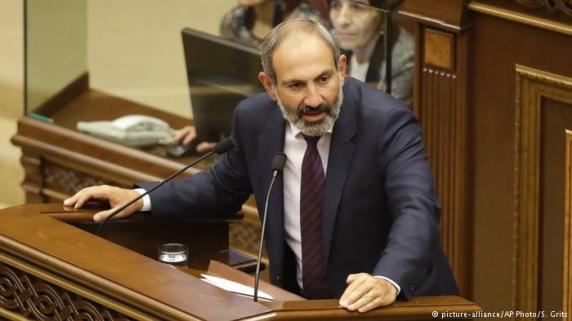 On May 1, following almost nine hours of parliamentary hearing to consider the nomination of the leader of the opposition, MP Nikol Pashinyan, as Prime Minster, the Armenia’s parliament voted down his candidacy with a 45-56 vote. Yelq Alliance, Tsarukyan Alliance/Prosperous Armenia, and ARF (with one exception) factions voted for, while the ruling Republican party (with one exception and one absent) voting against him. Tens of thousands of citizens in Republic Square and elsewhere around Armenia and in the world were following the parliamentary debate.

The result of the vote on May 1 was an upset, but not an unexpected one. The Republicans wanted to show that they still had enough cohesion and majority in the parliament to make sure Pashinyan would not have an easy road toward the Premiership.

On May 2, Pashinyan’s supporters flooded the streets of Yerevan to ratchet up the popular pressure on the Republican MPs, including by protesting in front of Republican MP’s houses in an effort to pressure them to change their minds. Later that day, bowing to an immense popular pressure, the Republicans announced that they will not put forth their own candidate during the next vote to take place on May 8 and will instead support one proposed by at least one third of MPs, effectively signaling support of Pashinyan. By now, he has been re-nominated by his own Yelq Alliance as well as Tsarukyan Alliance and ARF factions.

With the chances of a favorable vote on May 8 appear to be good for the people’s candidate, risks remain especially those related to post-election functioning of the government. First off, a key issue to be kept in mind is a very important yet not prominently visible role played by Gagik Tsarukyan. Oligarch-turned-politician who now controls the second largest faction in the parliament, Tsarukyan’s political career started under Robert Kocharyan and proceeded under Serge Sargsyan, with an exception of a short period where he dramatically fell out of favor with Sargsyan, only to be “rehabilitated” within couple of months.

With 31 seats in the 105-member parliament, Tsarukyan de facto became a king maker. Without him and his parliamentary weight, it would have been impossible for Pashinyan to move his opposition movement from the street into the parliamentary domain, a path largely paved by the 2015 vintage Constitution. This of course raises the question as to what does Tsarukyan get out of this realignment? Until the next parliamentary elections—which could be in as soon as two months (if Pashinyan forms a government with an agenda, which is voted down) or in a year—Pashinyan will be heavily dependent on Tsarukyan and possibly those Republicans who are expected to vote for him on May 8 to push forward his reform (predominantly electoral but also socioeconomic) agenda.

Second, the modality of the formation of the executive team can be critical for the reform effort. In a fractured parliament, Pashinyan has only two options: (1) ignore the composition of the parliament and form a government composed of reform minded individuals and technocrats, or (2) form a government taking into account various parliamentary factions. In both these cases however, there is a risk that the Republicans with the control of the parliament will either slow down the parliamentary proceedings until enough time has passed to cast a vote of no confidence against Pashinyan or force him to make concessions and through political horse-trading dilute and even hijack any attempts of reform.

A genuine reform effort will require genuine reformers. Recycling of former officials into the composition of the new government should be rejected by Pashinyan and his team. These bureaucrats—mostly conformists with mediocre technical skills—have been retained by the old regime for reasons unrelated to integrity, professional credibility, and vision. They were placed there to serve the regime with loyalty against the best interests of Armenia and its citizens. These individuals have been part of the problem (often for several years) and therefore cannot be part of the solution now. There is plenty of professional talent with integrity and technical skills among those in the nation, who have not bowed to the criminal regime and should be given an opportunity to serve their nation. Policy Forum Armenia—which has a wide network of established Armenian professionals in economics, international relations, and government affairs—stands ready to assist the new leadership in identifying those individuals.

Finally, Armenia’s foreign policy orientation under the new leadership remains the elephant in the room. Pashinyan’s declared “Armenia-centric” approach may contradict his assurances given to the Kremlin about no change in arrangements with Russia. If the status quo with Russia is kept, it cannot possibly be called “Armenia-centric” (domestic reforms alone are not sufficient for the orientation to be called as such). The latter would require at least some Westward movement to balance Armenia’s interests regionally and globally. For this, Pashinyan can use a truly Western-oriented political force to join the team to spearhead the (ever small but necessary) policy tilt. The Founding Parliament and affiliates—loosely coordinated by Jirayr Sefilian and his fellow political prisoners—can provide the necessary support and act as a buffer (if not a scarecrow) for any pressure from Russia to keep the status quo. Sefilian’s untarnished record and standing among both civilians and military (including veterans) will be an asset for the new team and should not be discounted. This will be a true test of Pashiniyn’s ability to make a serious appointment (in this case of Minister of Defense), as eluded to in an influential opinion piece by the Washington Post.